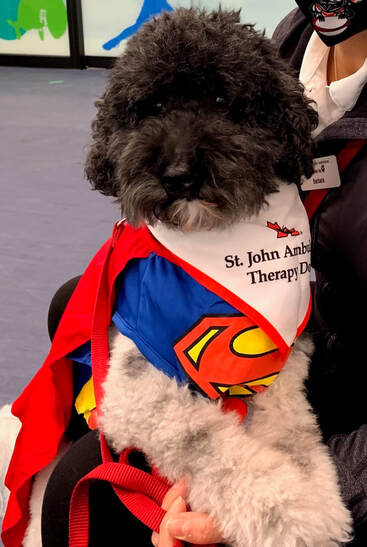 Enhance Your Charitable Giving
Published in November 2020
Many Canadians value the benefits that their local hospital, school, university, church or synagogue brings to their lives and to those in their community, particularly to the less fortunate. Most if not all of us have given our time, energy and resources to make a difference. My charitable efforts have focused on the goal of finding a cure to Parkinson’s Disease through the scientific research at UBC and our volunteer-run charity PPRI, while Barbara and her dog Walle spend time with young patients at BC Children's Hospital through the St. John Ambulance' Therapy Dog program, when COVID rules permit hospital access to volunteers. Yes, Walle went as "Super Dog" this Halloween.
​
To impact charitable giving throughout Canada even more, Legato has joined a team of financial and life insurance advisors across the country with the goal of raising $$ millions in charitable donations, nation-wide. By offering our professional expertise and advice, our goals include helping these donors magnify their charitable contributions such that their donations result in even more significant legacies in Canada’s charities. While the federal and provincial governments provide generous tax incentives to encourage individuals to support charitable institutions, the tax-exemptions and credits of the life insurance industry can also benefit almost every situation.

Enhance your charitable giving through Legato or one of our partners. Join our nation-wide effort so can we can all support our charities to become a little stronger, now and for years to come.

Here are some details of each of the three alternative paths: