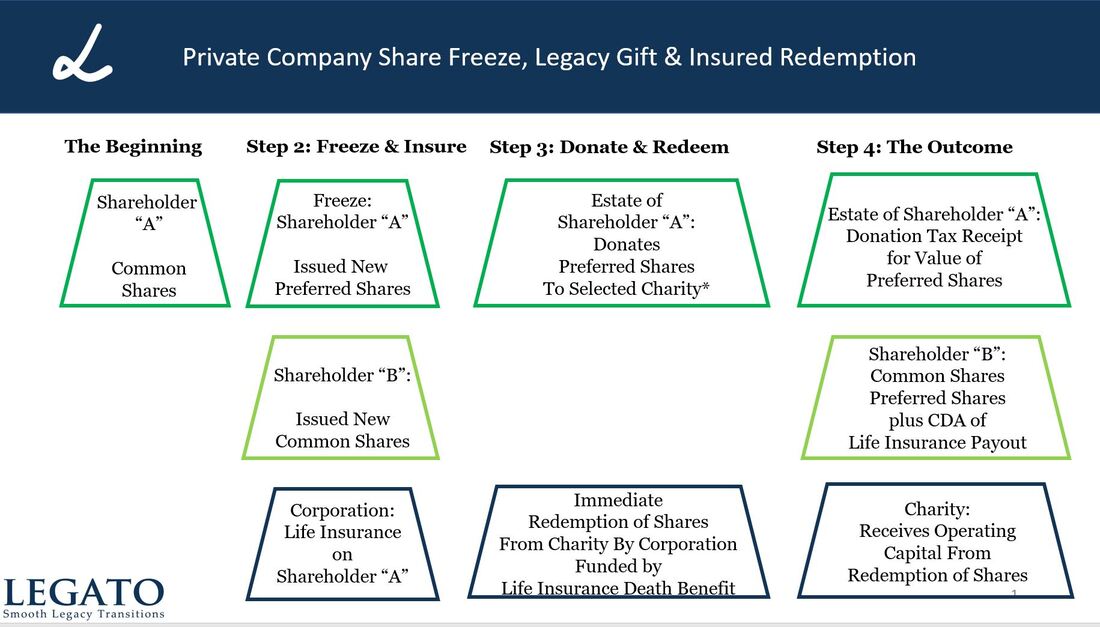 ​This strategy combines three main elements: an estate freeze, tax-smart investing and legacy giving. Even if the charitable donation does not get accomplished by the estate, the business owners will likely have put their personal finances and their family business in a stronger financial position.

Consider this example of a couple that we'll name Ziggy and Amrita, the shareholders of Cedar and Spruce Inc. (the "Corporation"). Over the past 20 years, President Amrita and CFO Ziggy have built significant equity in their Corporation by focusing on quality, people, and impact. Further to that, they developed a deep level of gratitude towards their local medical community and the associated Hospital Foundation following the survival from cancer of a close friend.

Amrita and Ziggy would like to make a substantial legacy gift to the Foundation using normally available tax incentives while being equally motivated to begin the transition of their profitable and growing Corporation to their three children. Recently valued at $5.0 million, all of the shares of their Corporation are only owned by the couple.

Important to understand that this strategy does not fall apart if the Foundation refuses to accept the legacy donation of their private company shares from their estate or if changes to the Income Tax Act make an impact. Not completing the legacy donation as part of the estate plans means that the significant liquidity event from the tax-free payout of the life insurance policy will be retained in the Company as will the corresponding CDA credit. Using that CDA, the Company could distribute tax-free dividends to the shareholders, which may include a flow of monies to the parent's estate as a preferred shareholder in order to cover the estate taxes, expenses, and perhaps estate balancing purposes.

​The tax consequences of this charitable donation and share redemption strategy will impact the estate of Amrita and Ziggy as well as the Corporation in the following ways:

The reorganization of Ziggy and Amrita's common shares into preferred shares of the Corporation will be tax-deferred assuming the rules of the Act are properly followed.​
Long-term life insurance can become self-funding after a number of years, say ten (10) years. In Canada, extra deposits are allowed into these permanent life insurance policies on the understanding that these monies become future premium payments. Yes, this is like holding a TFSA inside the corporation. ​

With the assumption that the adjusted cost base (ACB) of the million life insurance policy has been reduced down to zero at the time of the second death, the Corporation will receive an equivalent credit to the CDA account.
​
​As the Charitable Foundation is a tax-exempt entity, the dividend declared for redeeming the shares from the Foundation would not need to be a capital dividend. Since this redemption will not be consuming any CDA credit, the full CDA credit associated with the payout of the life insurance policy will remain in the company creating an additional advantage of allowing the tax-exempt distribution of retained earnings to the shareholder(s).

​Careful planning would need to be undertaken in order to make this plan work, especially in ensuring that the Foundation would be permitted to become the owner of the private corporation shares with a promissory note for redemption, even for the expected short period of time. The involvement of the client’s tax advisors and the Foundation's legal advisors would be essential.

​For those with a desire to achieve a significant sense of purpose from their life's work, this strategy may prove to be very impactful while affordable.
Don Anderson
Legato
​========