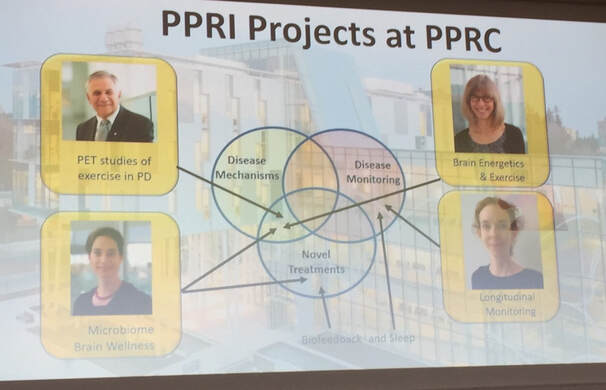 Partners In Search For A Cure
Published November 25th, 2019 by Don Anderson @ Legato
More than fifteen years ago, Kitsilano resident Noel MacDonald commenced a local fundraising event by inviting his neighbours over for a bowl of porridge and conversation about Parkinson's Disease. His wife, Marg Meikle, had been living with the disease. Those monies raised, sometimes generously donated from piggy-banks, accumulated to the point where the charity Pacific Parkinson's Research Institute (PPRI) was able to fund a new position for scientific research into Parkinson's within UBC's Centre for Brain Health. The position was filled by Dr. Silke Cresswell.

​This morning, the amphitheatre at CBH had few empty seats for PPRI's 2019 Scientific Update. Dr. Cresswell started her 20-minute review by thanking the members of our charity, saying that she was only there "because of this group". In reality, perhaps she was there because of some hot porridge, too?

Having just completed her first large study with 300 participants, Dr. Cresswell presented the results of her Microbiome Study for the first time and identified intriguing connections between the gut, inflammation, Parkinson's Disease, and mood, just to name a few. In addition, she mentioned the launching of the BC Brain Wellness Program that puts some focus on active interventions such as exercise, art, nutrition, mindfulness, time in nature and community-building to foster brain resilience.

Many of us have been affected by Parkinson's Disease. Perhaps we've lost a loved one or helped a friend living with the day-to-day challenges. With the goal of developing a cure for Parkinson's, our group of volunteers has quietly raised significant monies to support some of the best scientific research in the world by way of The Pacific Parkinson's Research Institute, our charity usually identified by its acronym PPRI.

Through the morning, we tried to wrap our heads around unfamiliar terms such as microbiome, somatotopic, and Clade-A as Dr. Martin McKeown and his four scientists shown in the image above outlined their studies and results. Several conclusions were reached:​


So, why have I been compelled to share this discussion with you?

​
One day, a cure for Parkinson's Disease just may become available. In the meantime, we can help make the lives of so many people become just a little bit easier. Now, go get some exercise, play music, visit your friends and live a community-based life. It's for your health!

Note: My Mom lived with Parkinson's Disease for more than five years before passing away at the age of 84. A patient at the clinic run by the Pacific Parkinson's Research Centre at UBC, she was very grateful for their advice and assistance.